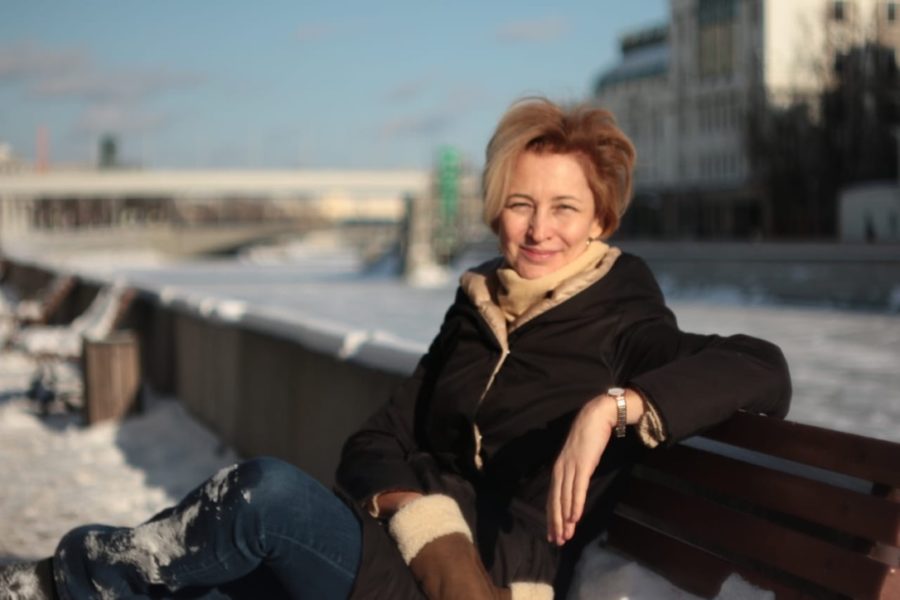 This is a post about peaceful civic initiatives of winter 2021 in Saint-Petersburg and Moscow, and about an exhibition of seventeenth-century frescoes saved in the 1930s from the destructive violence of state power.

For Whom The Bell Tolls

Roman Shustrov, a Saint-Petersburg artist who cast this «reading angel» figure in Izmailovskiy Garden, died of covid19 in August 2020. The visitors of the park leave small change on his lap, touch his nose “for luck” and put a scarf around the angel’s neck in cold weather. Another angel, a sad one, appeared in March 2021 on Karpovka embankment in Saint-Petersburg as a memorial to medical doctors and nurses who died during the covid19 pandemic, and to the sculptor who made it. Early in the pandemics, protective materials were lacking. The authorities of Saint-Petersburg were slow to take decisions. Volunteer groups raised funds to purchase and deliver respiratory devices for hospitals. Many medical doctors and hospital staff got infected and died. An unofficial “Wall of Memory” with photos and names of perished doctors and nurses was arranged on Malaya Sadovaya street. People would bring flowers as a sign of grief and gratitude, and solidarity. Later, the ice broke up on the official side, the information about deaths was confirmed and the names of the doctors and medical workers were put on a list, for families to get a compensation from the state.

A similar thing happened with this sad angel. First, there was a private initiative to commemorate the medical professionals and build up a memorial instead of the wall on Malaya Sadovaya. The artist’s family donated the sculpture. Then authorities of Petrograd district assisted in finding a place for it. At the final stage, the governor and his team organised an official inauguration as if it was their project.

Nevertheless, the new memorial is becoming still another people’s favourite. The angel, a scarf around his neck, is very sad, and very tired.

The hand-made signs taped to the trees remind of silent protests. Residents of Dmitry Ulyanov Street in Moscow’s Gagarinsky district are against the construction of a new metro station nearby. There is no need for it as one can easily walk to two other stations, or take a bus, there are quite a few of them. The construction will begin with digging a large pit, and the trees planted in the 1950s by grandparents of people who live here – now the trees will die. Each doomed tree has been given a name. This is a very recent photo. March 2021was cold and snowy. The Frescos of the Flooded Monastery

“The Frescos of the Flooded Monastery” is the part of the new (since September 2020) permanent exhibition at the State Museum of Architecture. The exhibits are fragments of mid-17th-century wall paintings architects managed to save when The Trinity Cathedral in Kalyazin was being destroyed and then flooded in the late 1930s – early 1940s. The grand Soviet plan had been to widen the Volga river, arrange gigantic water reservoirs and build hydroelectric power plants. One such project led to flooding several small towns and villages near Ivanovo, Tver and Nizhny Novgorod, together with many beautiful old buildings dating back from XVI-XIX centuries, including The Trinity-Macarius Monastery in Kalyazin founded in 1434. In the late 1930s, unable to resist the government programme, architects, restorers and art historians carried out express research on the areas to be flooded. Following the instructions of the Academy of Architecture a small group of 21 employees of the Museum of Architecture registered, described, dismantled and stored – to save – many architectural fragments. This was done in the shortest time possible, between November 1939 and September 1940.

The unique and difficult and work to remove the murals was carried out in just two months, January-February 1940. The restorers removed from the walls and mounted on a new base more than 185 square metres of paintings.

Here is how they worked: a deep, 6-8 centimetre wide groove was punched along the perimeter of the chosen composition, down to the masonry of the wall. The front surface of the painting was sealed with several layers of gauze on natural adhesives and let dry. Then, narrow and thin knives of various lengths were used to separate the plaster from the masonry. When the fresco would be left hanging on a narrow upper strip of plaster not yet detached from the wall, a wooden plate of the same size would be placed in front of it, the last strip of plaster would be separated from the wall, and the panel with the painting on it would be placed on the floor.

The murals in the Trinity Cathedral date back to 1654. The iconographic composition of the painting is traditional for the mid 17th century. The images of Adam and Eve before the sin are striking, their bodies perfectly identical.  Emotions are conveyed in the fragment “Joachim and Anna leaving the temple in Jerusalem” subtly and expressively. Beautiful and disturbing are the scenes from Revelations of John the Evangelist. “I will not accept the awful legacy of violence, I will not pass it on”*

How does one remain sane if one does not want to cooperate with those in power but cannot oppose? We seek “our kind” among strangers, or we hold on to each other, or hold on to a profession, and – or – retreat into private life, family or garden, flee to dachas and the countryside. All this is quite far from standing up to the regime.

What happens to those who does oppose? In January, I wrote about Moscow deputy Galyamina and opposition leader Navalny.  Galyamina was deprived of her parliamentary mandate by the United Russia party for organising protests. The decision was taken behind closed doors, neither Galyamina nor her supporters were allowed in. Alexei is in prison, writing cheerful posts on Instagram, although after months without a complaint he can no longer silently tolerate pain in his back. He does not get medical help and they wake him up at night, several times, to make a video of him. This is a way to prevent him from escaping, they explain. As I am completing the English translation of this article, first published in Russian on March 31, I can add that Alexey has been on hunger strike for several days.

Again and again I think of the 17th century frescoes saved from the ravages of state power by architects in the 1930s. Vocation, professionalism, meaningful work – against the system, yes. But the fact that this seems to be the only way to say no is hard to accept.∞

*I wrote about Daria Apakhonchich and her posters in 2020 , in the part “Foreign Agents”

Who did not come? Who of us is not here?