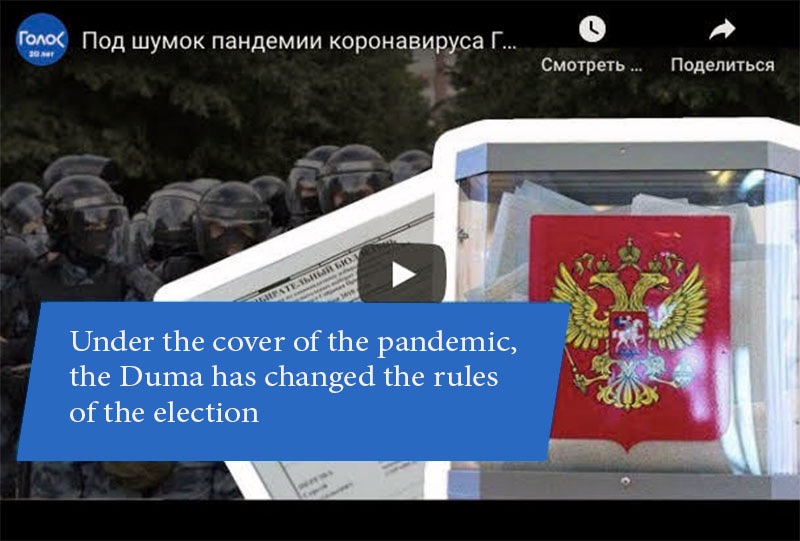 The amendments described in the video produced by «Voice», movement for election monitoring in Russia, were adopted today on May 20th by Council of Federation. Bullet paper substitution and voter manipulation risk is increasing.

What is changing?  It will become more difficult to register a candidate. Banning candidates from taking part in the elections will become easier. Previously, registration was denied if election commission rejected 10% of signatures. Now 5 percent is enough.  Voters who want to add their signatures for a candidate will have to write their surname, first name and patronymic by hand. This means that it will be easier for the election commissions to reject due to unclear handwriting, or mismatches with the databases of the Ministry of Internal Affairs. Electronic signature collection could help candidates. And now regional authorities can give candidates that right.  But it is allowed to collect no more than 50 percent of signatures through the state services electronic system.  In the second half, on paper, the errors making up 5 percent will be always possible to find.

Voting outside the polling stations is expanding.  Deputies have increased the list of reasons for voting outside the polling stations and made these reasons more flexible.  Now it is possible to vote from home not only because of health and disability, but also for “other valid reasons”.  This ambiguous wording can be applied to anyone.  Also, up to seven days prior to the election day, the election commissions were given the right to organise exit voting in any place, on request.  It will be difficult for observers to find out about such voting and monitor it.

Postal and electronic voting has been simplified.  The Central Election Commission can now select regions where elections will be conducted by mail or online.  Previously, it was necessary to change the regional laws. During the mail vote it is impossible to check if the voter is acting in person and freely, or detect a manipulation with envelopes.  Internet voting opens up possibilities for violation of voting secrecy, administrative pressure, system failures and bullet paper substitution.

The Duma has banned participation in elections by persons convicted of 50 categories of crimes, including dissemination of false information, violation of the rules of organisation of demonstrations, and fraud.  This can cause an increase in the number of cases against opposition representatives who would prevented from participating in elections.  Candidates that are undesirable might not even need to be in jail.  A conditional sentence is quite enough. These new amendments limit competition, the possibilities of control from the civil society and are aimed only at retaining power.