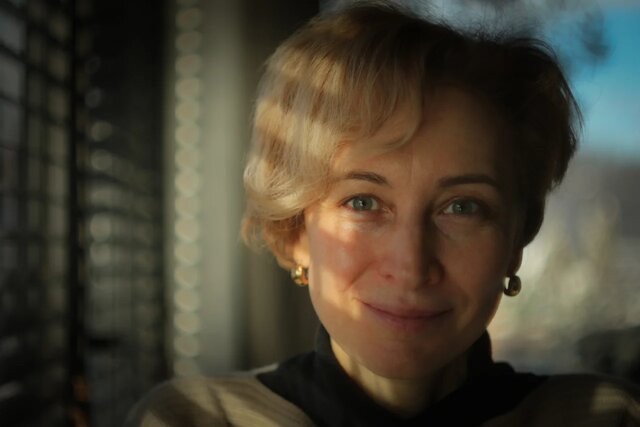 This was my dream three years ago, in 2018: a house on a hill overlooking the sea, I am feeling a warm breeze and the sun on my face. A wonderful day is ahead: I will be at meetings downtown, on the embankment, then back at home, working quietly as always. This is a dream, remember, I say to myself in my sleep and smile happily. Time to re-plant my pink roses from flower pots to the garden. Need to shift, a bit, those big stones first. I am glad Oleg is coming soon, the day after tomorrow already, he will do the job. Such a nice, soothing dream.

One year ago, in January 2020, we talked about our life together in a house he would buy somewhere near former Köningsberg (Kaliningrad today), so that we can commute to Europe often and whenever we want.

On January 19th he died, tragically and unexpectedly. The house on a hill did not come to pass. Now I am in January 2021, near the Baltic sea, in Kaliningrad. It is very cold here, and the sand on the beach is just like ice. Let’s take a small step back. At the end of last year, December 2020, covid-19 pushed my friend Katya and myself indoors, locked us up in her apartment on the twenty-second floor. My friend Ekaterina Melnikova is an organist and composer, well-known in the world of music. We spent long December evenings working on her website, selecting photos and creating text. Our covid-19 trip was relatively light as we took homeopathic remedies prescribed by a good doctor, who is also our good friend.

We did not get out for two weeks and had to put many things aside for a later date. It was easy to find pleasure in simple things – this is really something one can learn from Melnikova. “Mm.. ammazing”, – she says to a spoon full of porridge, and you just have to see her face – she revels in that moment!

Joy attracts more joy: Katya found an opportunity to play in Köningsberg Cathedral in Kaliningrad (former capital of East Prussia, the city was ceded to the Soviet Union in 1945 under the Potsdam agreement). She was very happy to get the access to a large scale organ in a big concert hall, at last, after one year without any concerts. The cathedral administration was also happy about the arrangement, because their own organists take vacation after the New Year holidays. During the ten days from January 13th to January 23rd, 2021, Ekaterina Melnikova played ten matinee concerts in Koeningsberg Cathedral, plus an evening concert on January 16th. My five days in Kaliningrad encompassed Katya’s concerts, getting a feel for the city, and a walk by the Baltic sea. To the evening concert, I invited Sasha Dyubakin – my former colleague, our friend, a very good photographer. (Unfortunately, due to a lengthy permission process, we were not able to make professional photos during the concert. Next time we will be better prepared). Sasha arrived on the day of the concert, on Saturday, straight to a café called Bouché where we sat with my new acquaintance, Natasha. Our meeting was arranged by an old friend, an American, whom we both have not seen for some years, but have kept in contact with. The threads of the past unravel and intertwine again leading to new encounters.

Before the evening concert we made it to a museum, the one in the Cathedral. In 1724, Köningsberg united three towns: Altstadt, Loebenicht and Kneiphof. So says the legend of a wall-size map, which meets the visitors right at the entrance to the museum.

Under the Empress of Russia, Elizabeth (1709-1762), the daughter of Peter the Great Köningsberg became part of the Russian Empire during the Seven Years War. There was no drama: the inhabitants took an oath of allegiance, received the right to work in the Russian civil service and to continue practising their faith. After Elizabeth’s death the territory was returned to Prussia, yet there is a reason to say that Immanuel Kant was for some time a Russian subject. Museum halls devoted to Kant offer numerous details. His father died early so he could not afford to complete his studies in Köningsberg university as the family could not support him. For ten years Kant worked as a tutor . “His first place of work was at a priest’s house in the village of Judschen, here he wrote his “Thoughts on the True Estimation of Living Forces”. The village of Judschen is now called Veselovka. Nikolai Karamzin (1766-1826), a famous historian of the Russian Empire, romantic writer, poet and critic met the philosopher in June 1879 and described their conversation in his “Letters of a Russian Traveler”.

Karamzin quotes the following from his conversation with Kant:

“I have written such things that cannot please everyone. Man can never be satisfied with what he possesses and is always striving for more. Death catches us on the way to something…. Give a man everything he desires, but he will feel at the same moment that this everything is not everything…”

And further: “I take comfort in the fact that I am now sixty years old and the end of my life is soon to come, for I hope to enter another, better life…” Sixty!

Even some of Immanuel Kant’s domestic habits are described here. “His dinner menu was simple, consisting of three hearty dishes, to which cheese, dessert and wine were added. The philosopher ate with great appetite and was delighted when his guests also complimented the food. <…> People, who came to dinner with Kant for the first time, were amazed that he ate so much, they had no idea that the philosopher ate only once a day. He never had too much to eat. He knew the dangers of caffeine and nicotine. To the astonishment of his compatriots, Kant never drank beer, relying instead on water and a small quantity of wine. He said of beer: ‘It is not a drink, but bad food’.

One of the museum’s caretakers praised Sasha saying “Good to see that someone actually reads the comments here and not just makes a selfie using a nice background”. The best background here is the gleaming mahogany Wallenrodt Library. Martin von Wallenrodt, Prussian Chancellor, donated his private collection of books and manuscripts to the city. Little of the collection survived but the beautiful wooden framework has been restored to its former glory. Yes, the shelves of the Wallenrodt Library is the tourists’ preferred background. At Katya’s matinee concerts she played I.S.Bach, Louis-Nicholas Clérambault’s Suite, selected English pieces for the organ and her own improvisations, presenting various periods and styles. Every part of the performance was preceded by Katya’s remarks on the different characteristics of European organs as well as organ music. The evening concert included I.S.Bach, Tchaikovski, Grieg, Balbastre, Nino Rota – his music to “Eight and a half” and Ekaterina Melnikova’s “Beethoven-Tango” and “Toccata Freeway”. Cameras were placed next to the organ, and down in the concert hall, monitors on the wall showed the organist at the organ console, sometimes even a close-up of her feet on the pedal keyboard.

When the finale of variations on Fellini’s «Eight and a half» theme was played, something amazing  happened: the decorations of the baroque organ started to move! Little stars got to spin, some baby cupids raised their horns and began to turn right and left, others started to move their drumsticks. It was just like… “…the angels will blow their trumpets”! The final toccata soared out of the cathedral and flew over the night city, merging with the snowy whirlwinds.

The weather was unusually cold those days, and it snowed heavily. After the concert, the four of us – Katya, Galya, Sasha and myself – had dinner in a restaurant called “Yes”. I brought something for Sasha, some Indian beads for men, the thing that caught my eyes particularly often lately as if reminding that it was time to give it to someone.

My explanations must have sounded confusing: once an American friend, the same one who had introduced me to the Natasha we had coffee with in the morning, many years ago that friend had brought me dresses and silver jewellery from India. Most of those things are now gone, but this one I still have…

Sasha quite liked the beads! It turns out he is into India, and is reading a book called “Two Lives”, which describes spiritual experiences in India. I nod, yes, I read this one, a friend recommended to read it when I was desperate after Oleg’s death, one of the book’s key messages being that our life does not end with human body disappears from the earth…

Galina looked at Sasha, then at me, a spark in her eyes. I try to explain: the 19th of January will mark one year since he died, he wanted to live somewhere near Kaliningrad, so my trip with Katya this time is a sort of… Gala interrupts: “He is here now, by your side, like he is guarding you, I feel this…”. Then she adds: he did not die, he was “taken” from here.

Galina and I spent a lot of time talking in the following days, about her and her vocation, about things not easily explained, about me and Oleg. “He is not an easy guy, that’s for sure, but he’s a very good person and he loves you, and look how he managed to get us all together here…”.

We went to the sea coast, I saw all sorts of private houses in Zelenogorsk… they were not like that one, the one from my happy dream. The sea, however, it does seems to know everything and always gives me a consolation – it was a good reason to come here. On January 19th, in the evening, we came to a completely empty Königsberg Cathedral. Katya played, then Galina – Nanateya – sang and played on chrystal bowls. Ole Jorgensen helped to turn our amateur recording of this in memoriam meditation into a 16-mintes video .

Who did not come? Who of us is not here?